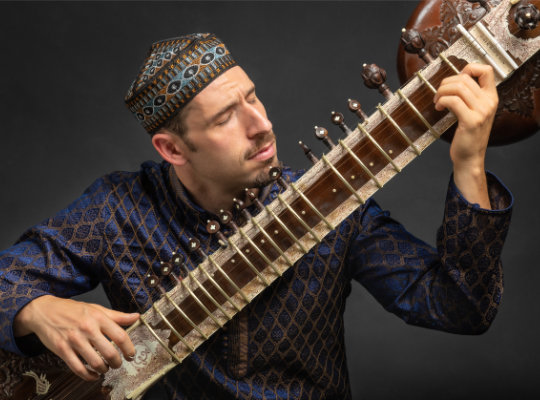 Josh embarked on his musical career at the age of four receiving training in western classical, jazz on piano and bass in New York City from some of the most accomplished musicians and has performed in prestigious concert halls such as the Lincoln Center and Alice Tully Hall.  In his teens, Josh fell in love with Hindustani Classical Instrumental Music and shifted his focus to sitar and continued to pursue his bachelor’s degree from New England Conservatory.

Josh is a student of the Maihar Gharana and pursued his interest with Ustad Ali Akbar Khan as well as Ustad Aashish Khan and Sri Alam Khan. Josh is also proficient in playing tablas.

Josh has travelled extensively internationally giving concert tours. Josh has performed with most of the eminent tabla artists in the world including Pt. Swapan Chaudhuri, Pt. Anindo Chatterjee, Pt Kumar Bose. He has been hailed as the torchbearer for Pt. Nikhil Banerjee of the Maihar Gharana.

Accompanying on tabla is Hriday Raag Buddhdev. Hriday is an 18-year-old, 2nd year Computer Science student at the University of British Columbia, Vancouver.  He has learnt Tabla since the age of 4 and is currently taking advanced taleem in the Punjab Gharana (style)from Shri Amritpal Singh, senior-most disciple of Pt. Yogesh Samsi.

Hriday has enjoyed giving Tabla accompaniment for prominent artists, such as Pt. Hemant Pendse and Shri Arijit Mahalanabis.  In 2018, Hriday performed for the BC Provincial Juno Event ‘The Raga Experience’. He is a twice awardee for the Ali Akbar Khan Scholarship for the Advanced Instrumental Class.

Patron tickets at Patron desk at the event