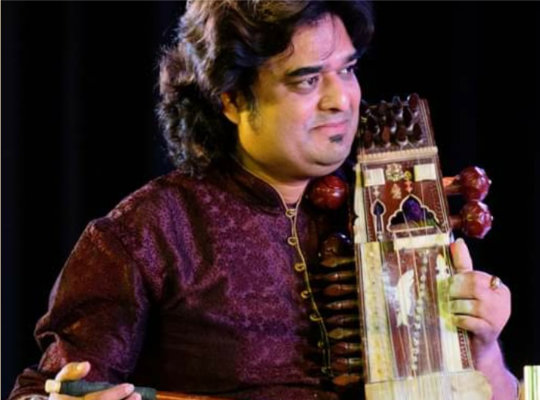 Pankaj Mishra hails from a musical family and was trained from an early age by the renowned Sarangi Player of Banaras Gharana late Pt. Mahesh Prasad Mishra.

Pankaj Ji has performed internationally both as a solo artist and accompanist at several prestigious events in India, Dover Lane Music Conference, ITC Festival, and the Salt Lake Music Festival.

Vineet Vyas (Tabla Artist) is a disciple of the legendary Tabla maestro, Pandit Kishan Maharaj. Vineet has performed at many prestigious venues and festivals throughout India and across North America with some of India’s eminent classical artists such as Ustad Amjad Ali Khan, Pandit Rajan and Sajan Mishra, Ustad Aashish Khan, Ustad Shahid Parvez and Dr. L Subramaniam. His solo CD, Taalworks, was a breakthrough album featuring tabla at the forefront, and was released in India through Times Music. In 2010, his solo album The King of Dhamaar – a Tribute to Pandit Kishan Maharaj, received an East Coast Music Award nomination for Best World Recording. Vineet holds an MFA in World Percussion from the California Institute of the Arts. In 2015 and 2019 Vineet was a finalist for the Muriel Sherrin International Achievement in Music award presented by the Toronto Arts Foundation. Vineet Vyas will be releasing another recording featuring the beauty of rhythm and Tabla improvisation in Autumn of 2022.