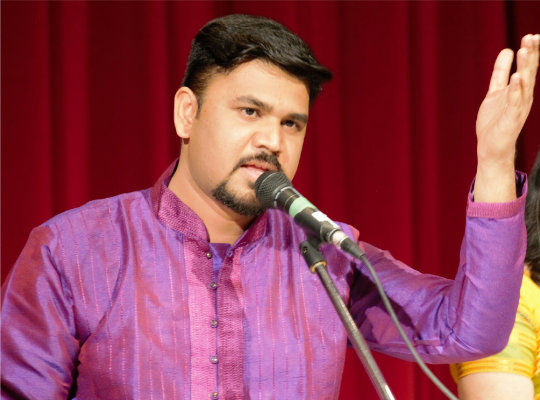 Shri Rohit Kalsekar, a software specialist with a master’s in engineering from McGill is a talented vocalist based in Toronto. He received his initial training from Pt. Rajendra Kandalgaonkar He has been a disciple of Pt. Vijay Koparkar for the last 12 years. He has been a recipient of multiple scholarships and has performed as a playback singer and participated in Marathi plays. He also gives music lessons in Hindustani Classical music. Numerous awards have been bestowed upon him including the first prize at National level in the All-India Radio Classical vocal competition. He has performed in major centres across Canada and in Mumbai and Maharashtra, India.

Accompanying Rohit Ji on the tabla is Shri Rigved Satish Deshpande. Rigved is currently a disciple of Pt. Ramdas Palsule. Rigved has been playing tabla since the age of 5. His initial training was from Pt. Chandrashekhar Vaze for 10 years and then from Shri Swapnil Bhate for 2 years. Rigved has won numerous awards and and has accompanied numerous well know artsists including Vidushi Padmatai Talwalkar, Pt. Ajoy Chakraborthy, Pt. Vishwanath Kanhere, etc. Rigved has contributed to many Sangeet Sammelans in Pune, Mumbai, Bangalore, etc.